A Case For Curiosity

Curiosity is a critical trait of people who bring about innovation in our world. From Thomas Edison to Leonardo da Vinci and Albert Einstein, we have seen humans shift the narrative of our collective existence by allowing their curiosity to transport them from awareness to action.  Some of the most celebrated artists of all time have created masterpieces by using their curiosity to experiment on canvas (Claude Monet, Jackson Pollock, and Jean-Michel Basquiat) and more recently on everything from smartphones (Miranda July) to building facades (Jenny Holzer) to plates (Vik Muniz). In her latest book “Big Magic: Creative Living Beyond Fear,” Elizabeth Gilbert makes the case that allowing ourselves to use curiosity as a tool for everyday living could not only bring about a more fruitful life, but a more pleasurable one, too.

The way that Gilbert sees it:

“The trick is to just follow your small moments of curiosity. It doesn’t take a massive effort. Just turn your head an inch. Pause for a instant. Respond to what has caught your attention. Look into it a bit. Is there something there for you? A piece of information? For me, a lifetime devoted to creativity is nothing but a scavenger hunt — where each successive clue is another tiny little hit of curiosity. Pick each one up, unfold it, see where it leads you next.”

Inspired by her writing, I summarized some of the ideas that Gilbert shares as to why is curiosity so important. I have also paired these ideas with art works that exemplify them below:

Curious people always ask questions and search for answers in their minds. Their minds are always active. Since the mind is like a muscle which becomes stronger through continual exercise, the mental exercise caused by curiosity makes your mind stronger and stronger. 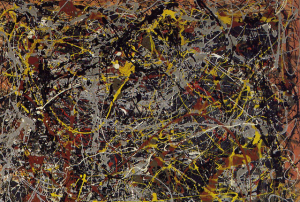 It’s easy to dismiss Jackson Pollock’s masterpiece No. 5, 1948 as a senseless splatter of paint—but even if you can’t appreciate its aesthetic, this piece has a history that’s worth its weight in house paint and stacks of cash.

In the wake of World War II, New York City artists like Pollock, Barnett Newman, and Willem de Kooning followed their curiosity and began pushing the boundaries of their paintings in a direction that would be dubbed “Abstract Expressionism” by art critic Robert Coates in 1946. This wave of modern art made New York the center of the art world, thanks in part to the movement’s embrace by esteemed collector and patron Peggy Guggenheim. Pollock’s contribution was his drip paintings, of which No. 5, 1948 is his most famous.

When you are curious about something, your mind expects and anticipates new ideas related to it. When the ideas come they will soon be recognized. Without curiosity, the ideas may pass right in front of you and yet you miss them because your mind is not prepared to recognize them. Just think, how many great ideas may have lost due to lack of curiosity? 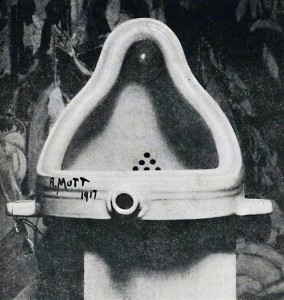 In December 2004, Duchamp’s Fountain was voted the most influential artwork of the 20th century by 500 selected British art world professionals. The Independent noted in a February 2008 article that with this single work, Duchamp invented conceptual art and “severed forever the traditional link between the artist’s labour and the merit of the work”

Rafael Lozano-Hemmer’s curiosity allows him to think of art projects and relational architecture that foster community. The artist thinks of his interactive works as “public fountains.” His latest installation, Open Air, records voice messages via smartphone app and translates them into patterns made by 24 spotlights fixed on the Philadelphia skyline. 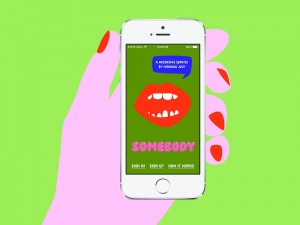 Miranda July made an app and called it art. This is of note because July—an artist, writer, director and actress—is not exactly an app person. July’s application, Somebody™, which the New Museum proudly co-presented in 2014, investigates the ways technology mediates our interpersonal communications.

July describes this messaging service in the following way: “When you send your friend a message through Somebody, it goes—not to your friend—but to the Somebody user nearest your friend. This person (probably a stranger) delivers the message verbally, acting as your stand-in.” Meeting somebody on Somebody takes a little serendipity, a little bit of being in the right place at the right time. For what it’s worth, July doesn’t see Somebody as a mode of communication akin to texting or email, anyway. It’s a massive public art project, an experiment to see how willing people are to don another human’s personality and connect with a stranger. “It’s not about the communication, because it’s a pretty clunky way to communicate,” she admits. “It’s more about an experience.”

Is Your Office Art “Working” For You?