Anish Kapoor is up in arms about his Chicago installation Cloud Gate, endearingly nicknamed ‘The Bean’ getting plagiarized in the Xinjiang oil town of Karamay in China. Why would China steal ‘the bean’? (If I could tell you who the alleged plagiarizing artist is I would, but their name is not being disclosed by Government authorities).

Installed in 2004, this big shiny public art installation is the icon of Chicago’s Millennium Park. The bean has become both an icon of the park and the city. Anish Kapoor argues that the sculpture has resulted in property prices going up in the area and has brought millions of dollars to the city through national and international visitors numbering more than 4.75 million people a year.

It also brings business. In 2005, Toyota Motor Sales U.S.A. paid the city $800,000.00 to rent the park for a private party. It turned out to be just the first of many private events to take over what was supposed to be public space.

The success of POPS varies and this is something limeSHIFT wants to help with. Partnering with private companies to become responsible patrons of the arts but also to use art to excite and inspire and transform spaces within their corporate catchment.

But there’s another reason why they invest in public art. Public art is also cultural innovation, experimentation. It starts conversations.

This is what Anish Kapoor has to say about public art:

I think it’s terribly important. Public art, like most public activity, is experimental. It has to be. Experimental in the sense that that’s how we move forward culturally. We move forward through this public experimentation. It may be public theater. Or public reading. We don’t do those things any more. But they are part of a process of cultural innovation, experimentation, whatever one wants to call it. Sculpture plays a role in that. Sculpture plays a whole role in the whole process of us saying, “What is our communal space?” Cities generally speaking are planned to death. They don’t allow room! They don’t allow even the smallest room for this kind of innovative, open-ended process that looks at, “What does it mean to properly participate?” It’s complicated. But I think those things have to be opened up to.

In his interview with CitiLab, early this week, Anish Kapoor withholds the alleged theft of his sculpture on par with the theft of technology or military equipment and has appealed to Chicago Mayor Rahm Emanuel to help fight the plagiarism.

Although the Chinese sculpture can’t do justice to the Anish Kapoor’s original creation, there is calculation behind the imitation. For same reasons that Vegas built a mini Eiffel Tower, China is capitalizing on Kapoor’s work to attract interest, tourists and, finally money. 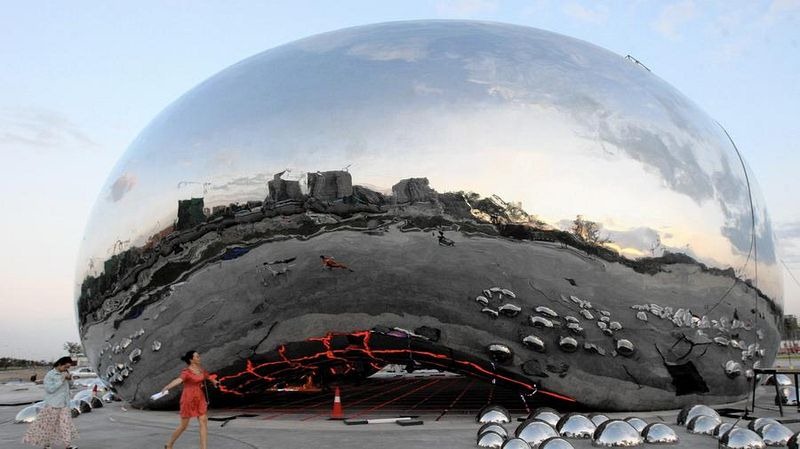 Cloud Gate is the largest sculpture of its kind in the world. Walking under its 12-feet high arch, is an experience of distortion, reflection, humor and connection. Seen from the outside, it reflects the magnificent Chicago skyline.